Did you blink? You might have missed it … but we got our first glimpse of the Dresden Files TV show in a teaser of 2006’s movies and shows from the Sci Fi channel just before the second part of their Triangle miniseries.
This is exciting, folks. More to the point, this is real. We’re actually going to see it, and as fans of Jim’s success, it’s going to be on our heads to make sure this thing flies. Tell your friends. Get the buzz going early. If we’re going to see this thing turn into a full-on series, we need to get the viewership out and active by the time this bad boy hits the airwaves.
“But enough with the rah-rah sis-boom-bah, Fred,” you say. “Show me the pictures!” Well, since you asked so nice…

We got all of three seconds of this. SciFi’s calming female voice says, “Solving crimes… in a magical way.” and we get our glimpse. Here’s the three key images we saw: 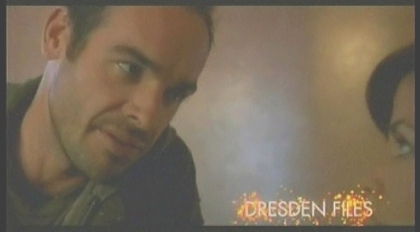 Paul Blackthorne, as Harry Dresden, leans in to have an up-close conversation with a dark-haired woman. We know from the casting announcement that this could be Murphy we’re seeing come in from off-frame, but it could just as easily be Bianca or someone else we haven’t heard about. But check out them apples — Blackthorne really does look the part! 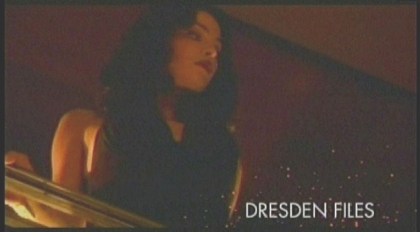 A sexy brunette looks down from a balcony, dressed to the nines. Smart money here says that’s probably Bianca — even with the haircolor reversal in casting, it’s a pretty good guess to say that Murphy’s not going to get caught dead in makeup and a get-up like this one. We also know that the movie’s at least somewhat based on Storm Front, so the likelihood that Bianca will show up in there is high … and, just to bring a little skullduggery into this, her number of scenes would be likely to be few, so it wouldn’t be shocking if they did the shooting of her scenes early so they could be done with eating up that actress’s time… 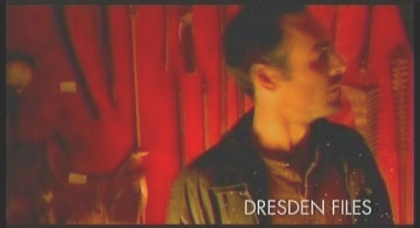 Blackthorne as Harry again, on the scene, investigating … what? We’re not quite sure here. The red wall seems menacing, and the stuff on the wall there might be … weapons? Hard to say. Is this a crime scene or a villain’s lair? We won’t know until the movie hits the airwaves.